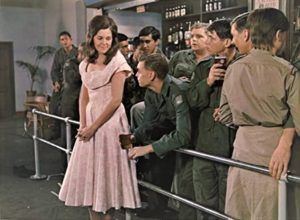 In October 1969 Columbia pictures released ‘The Virgin Soldiers’ based on a best-selling novel by Leslie Thomas. The story is about a young national serviceman posted to Singapore during the Malayan Emergency, counting the days to demob and more interested in chasing girls than soldiering. Like PFC Chris Taylor in ‘Platoon’, Private Brigg is dominated by two NCO’s; the cowardly, blowhard Sergeant Wellbeloved and the professional soldier – Sergeant Driscoll. Scenes filmed at Selarang camp in Singapore add authenticity with the soldiers sweating out the day in their jungle green uniforms and off duty ordered to attend a dance held in the canteen. The Colonel and RSM drink whisky, other ranks drink Tiger beer, the sergeants from pewter tankards and squaddies from glasses bearing the Tiger logo. 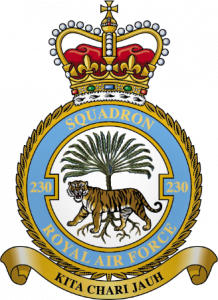 Servicemen in Singapore and Malaya were enthusiastic consumers of Tiger beer in their messes, canteens and NAAFI’s or off base in the coffee shops, bars and cabarets. In February 1937 King George VI approved the badge design of RAF 230 Squadron that commemorated its association with Malaya. The travellers palm was a reference to long flights whilst the tiger was inspired by labels on the local beer.

The scroll underneath bears the Malay – Kita Chari Jauh, translated as ‘We search far’. 230 squadron operated Short Singapore flying boats from 1934-1938 later replaced by Short Sunderland flying boats when they were based at RAF Seletar.

Tiger beer was first brewed by Malayan Breweries Ltd. at Alexandra Road in 1932, renamed Asia Pacific Breweries in 1990 and in 2013 merged with Heineken Asia Pacific.

The brewery relocated to a larger site at Tuas and runs regular factory tours. Highlight of the tour is a final stop at the Tiger Tavern decorated in dark wood and leather displaying shields presented by departing military units, vintage advertisement posters and the tiger beer testimonials. 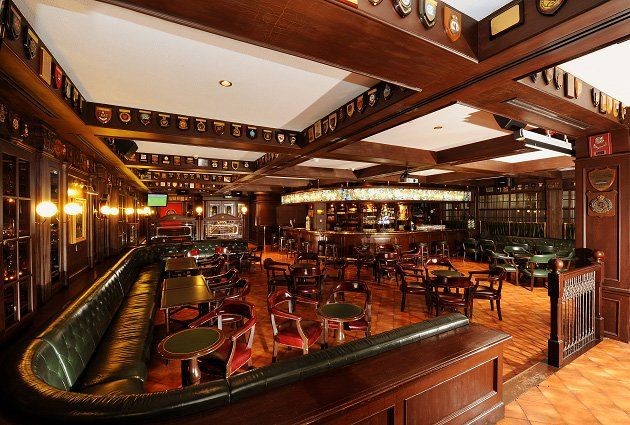 In 1956 Tiger beer gained literary recognition with the publication of Anthony Burgess’ first novel – ‘Time for a Tiger’ borrowing the beer’s advertising slogan for its title. This comic novel set against the decolonisation of Malaya introduces characters whose 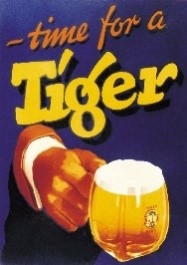 Burgess, best known for his 1962 novel ‘A Clockwork Orange’, was a true Renaissance man; composer, playwright, screenwriter, broadcaster, linguist and educationalist. Born in Manchester in 1917 he grew up in a pub and tobacconists becoming a lifelong heavy smoker and drinker as a result. During the war he was an Army Education Corps sergeant in Gibraltar before his return to school teaching on demobilization. In 1954, together with his wife Lynne, he went to Malaya to teach at the Malay College in Kuala Kangsar, an experience that provided the material for his first three novels. 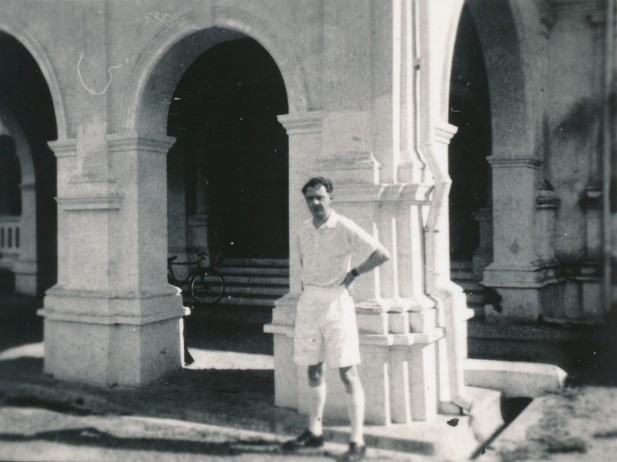 Burgess had seen a wooden clock with the Tiger beer slogan whilst drinking around town and wrote to Malayan Breweries asking for one, pointing out that his book was about to advertise their beer. They wanted to read the book first and so Burgess mischievously added a line of dialogue to his draft: ‘Not Tiger, not Anchor. Make it Carlsberg. It costs a bit more, but it’s a better beer.’ Carlsberg responded with a case of beer. In 1970, Burgess by then a well known author returned to Singapore and received a reply that he and his wife could drink freely any of Malayan Breweries beverages. He noted in his memoir: ‘But it was too late: I had become wholly a gin man’.

The characters of Victor Crabbe and his wife were based on himself and Lynne. His most comic character Nabby Adams also had a counterpart in real life:

‘There was because of the Emergency, or war, a new class of expatriate policeman around in Malaya. Policemen used to emergencies were brought out under contract, chiefly from Palestine, and they were made into lieutenants. The rank of police-lieutenant seemed to imply a degree of education and refinement, but most of the breed who appeared to drink deeply in the Idris Club were a brutal lot. But there was one police-lieutenant of mysterious origin who might have been Anglo-Indian but spoke English with an accent undoubtedly Midlands though hard to place. He was sallow-brown through punishment of his liver. He was nearly seven feet high and was called Lofty. His real name was Donald D. Dunkeley. He had spent most of his working life in India, and he spoke Hindi, Urdu and Punjabi with fluency. He was in charge of police transport though he himself could hardly drive, and his constant companion was his corporal, Alladad Khan whose wife accused him of a lack of ambition and a taste for Western impurities like Tiger beer, bacon and eggs and kissing on the mouth.’ 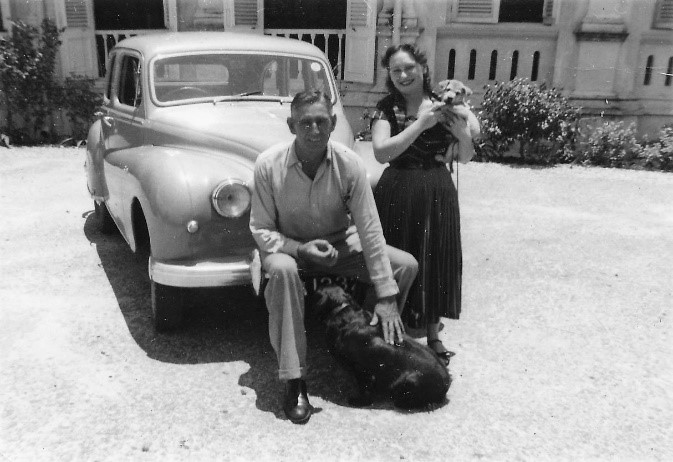 Time for a Tiger, The Enemy in the Blanket (1958) and Beds in the East (1959) were later published in an omnibus edition as The Long Day Wanes: A Malayan Trilogy. They were well received by literary critics such as the Daily Mail’s Peter Quennell, later Sir Peter Quennell, who wrote: ‘I could enjoy a beer with Sergeant Nabby.’ Burgess explained that in the class consciousness of the 1950s his upper class reviewer could not accept the foul mouthed, drunken Nabby was a lieutenant and so demoted him to sergeant.

Tiger beer celebrated their silver jubilee in 1957, the same year Malaya gained independence from Britain in a ceremony at Kuala Lumpur’s Merdeka square. In 1968 Britain announced the total withdrawal of troops from Malaysia and Singapore by 1971 which was a shock to Singapore whose gross national product relied heavily on British military bases. By then Tiger beer’s market share was enough to survive the loss of such loyal customers and Singapore’s rapid economic development saw it join Hong Kong, Taiwan and South Korea as one of the four Asian tigers. Throughout Chinese history the tiger has been revered as a symbol of strength and courage ranking third in the twelve-year cycle of Chinese zodiac signs. Adoption of the tiger logo proved a winner for another iconic 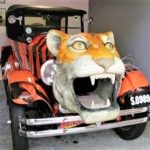 Asian brand – the cure all, camphor and menthol based Tiger Balm ointment. Developed by a Rangoon herbalist in the 1870s the business was taken over by his sons Aw Boon Par and Aw Boon Haw, whose name in Hokkien means gentle tiger. Boon Haw moved the production plant to Singapore in 1926 and enjoyed driving around the Malay kampongs handing out free samples from his custom made tiger car. Less fondly remembered was Tomoyuki Yamashita the WWII Japanese general who masterminded the Malayan campaign and fall of Singapore within 70 days earning him the nickname ‘Tiger of Malaya’.

The power of the tiger brand was recognised by the British Empire marketing board who published a famous poster encouraging people to ‘Buy Singapore Pineapples in Tins’. The Empire Marketing Board (EMB) was formed in 1926 to generate public support for purchasing Empire goods. Scientific research was a large part of their work but they also organised poster campaigns, exhibitions, lectures, radio talks and had their own film unit. Posters were put up in 450 British cities and towns with distinctive imagery and bold colours attempting to stir up patriotic feeling. The EMB closed in 1933 because of government cuts during the depression and introduction of imperial preference – a system of free trade agreements between the constituent parts of the Empire. 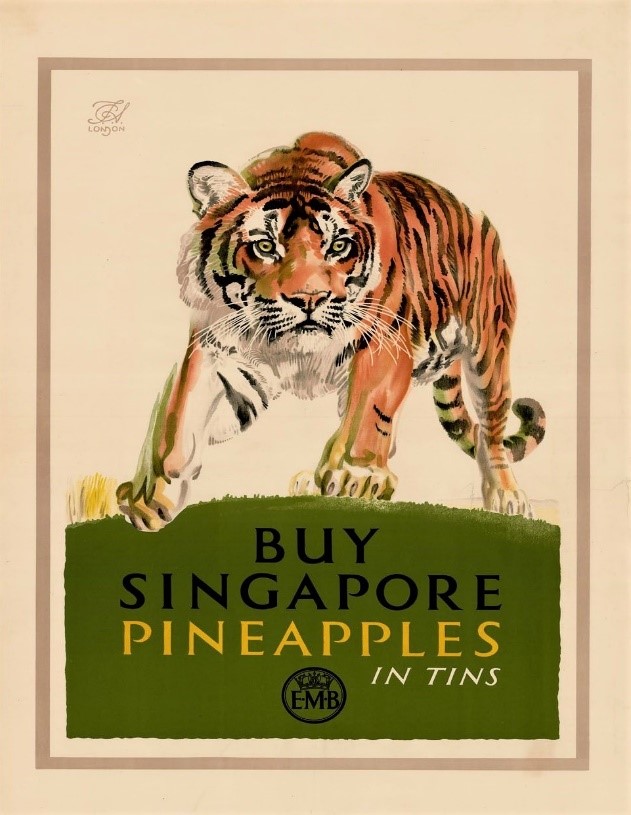 In 1986 Tiger beer confidently declared their gold medal beer to be as famous as Raffles Hotel whose centenary was being celebrated a year early to coincide with the year of the tiger. As part of the celebrations a live tiger was led into the hotel’s bar and billiard room where the last tiger in Singapore had been shot. 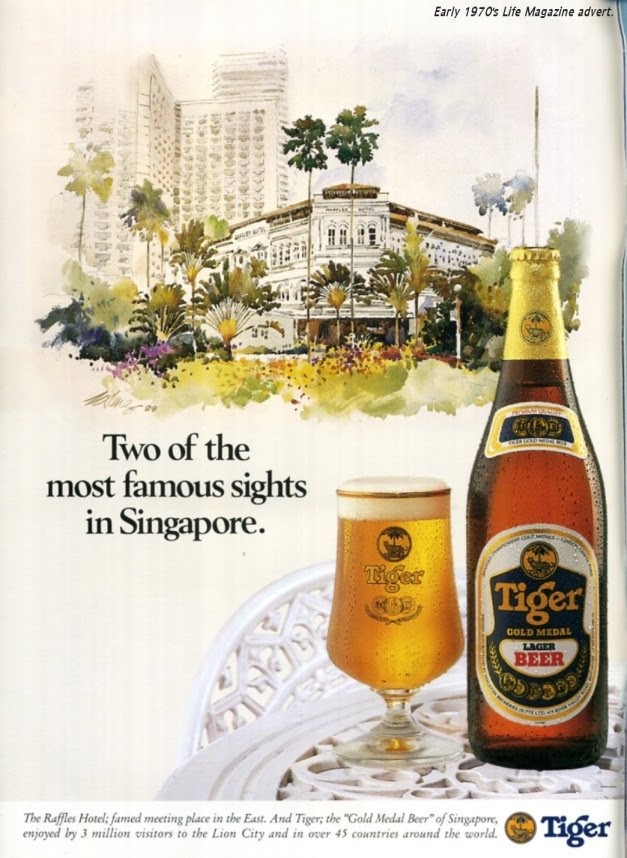 In 1819 when Sir Thomas Stamford Raffles landed in Singapore the island was covered in dense jungle with only a small Malay village at the mouth of the river. Tigers from the Malay peninsula could easily swim across the narrow Straits of Johore and in 1831 the first death from a tiger attack was recorded. Throughout the middle decades of the century deaths amongst Chinese and Malay plantation workers were a daily occurrence and the government offered rewards to hunters. In 1866 the botanist and marine biologist Cuthbert Collingwood asked:

‘It is difficult to conceive what can induce tigers to cross over to Singapore, for although there are a few deer and plenty of pigs in the island, there is much greater variety of game in the Johore peninsula. Can it be a taste for human flesh?’

By the turn of the century these ‘gentlemen in stripes’ as the press called them had fled back to the Malayan peninsula but on 13th August 1902 the Straits Times created a stir with their headline ‘A Tiger in Town’.

The day before a circus tiger had escaped, wandered along Beach Rd. and laid down in a storage space underneath the Raffles hotel bar and billiard room. The hotel manager called out the headmaster of the nearby Raffles Institution and Singapore rifle team member Charles McGowan Phillips. Mr Phillips, still the worse for wear after attending a ball at Government House arrived in pyjamas armed with his Lee-Enfield rifle and hollow nosed cartridges. His first three shots missed but the tiger was killed by a fourth shot between its eyes and after some persuasion the hotel staff dragged it out.

Tiger beer created an advertisement in the now seldom seen long copy format based on the tiger shoot. In their story – ‘The Tiger’s tale’ a billiard player Muthu spotted the tiger and called out Mr Phillips. He was said to have ordered a cold pint of tiger beer at the bar:

‘and as the golden liquid slid down his throat he could feel his body being given the once over. With the beer froth still wet on his lips he leapt out onto the verandah to confront the beast.’ 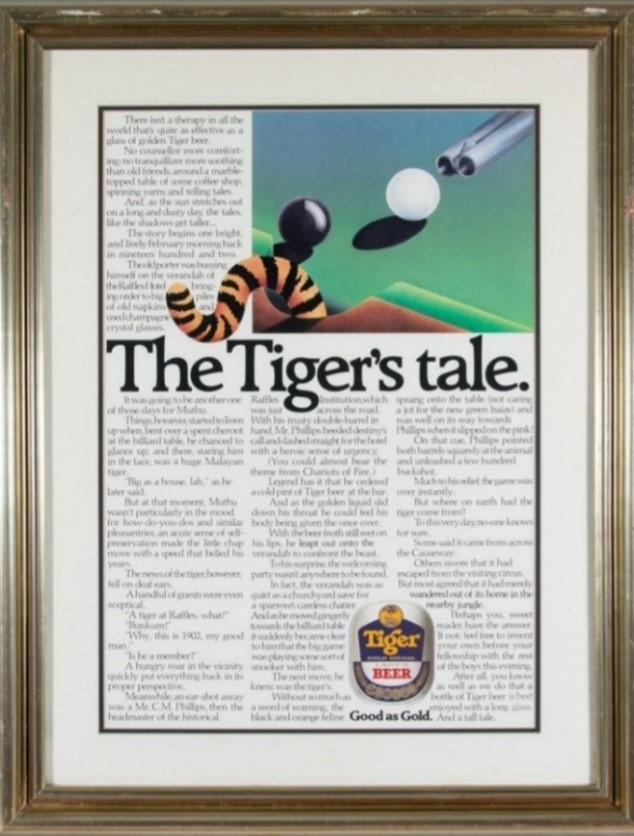 The Malayan tiger is now extinct in Singapore and dangerously close to extinction in peninsular Malaysia with the remaining 200 animals struggling for survival from poaching and habitat destruction. Tiger beer is helping to save them by donating and joining a global partnership with the World Wide Fund for Nature.

The tiger, colloquially known as Pak Belang meaning ‘Sir Stripes’ is the national animal of Malaysia depicted on the country’s coat of arms and heraldry of many institutions. The state crest of Singapore incorporates both a lion and a tiger supporting a shield emblazoned with a white crescent moon and five stars. The tiger symbolises the nation’s historical and geographical connections with Malaysia while the lion represents Singapore itself.

The Merlion consisting of the head of a lion on the body of a fish is the official mascot of Singapore first used as a logo by the tourist board. The head represents the original name of Singa Pura meaning lion city in Sanskrit and the body represents Singapore’s origins as a fishing village. Lions however have never been indigenous to the Malay Peninsula. According to legend a prince who fled to the island saw an animal on the shore which may have been a tiger but mistook it for a lion.

The lion and the tiger exist harmoniously in Singapore but across the region they fight for control of the beer market. Lion beer has been Sri Lanka’s best-selling brand since the 1840s while Singha and Leo beer with their lion and tiger logos have cornered the Thai domestic market. Satu lagi Tiger ! 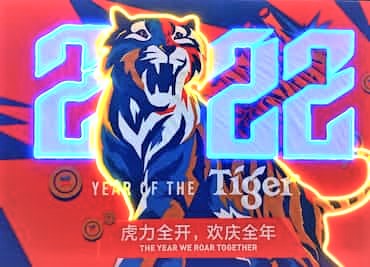